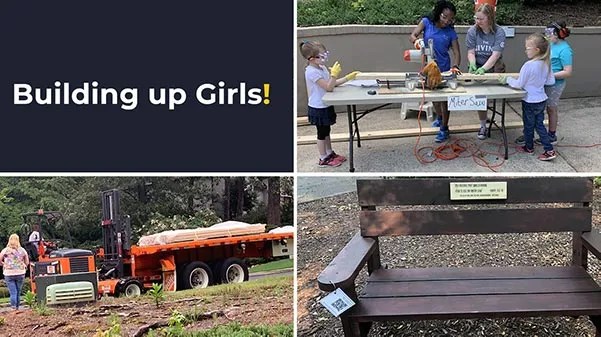 In the construction/trade field, Abby Phillpott, a recent Girl Scout Gold Award recipient, saw a disproportionate number of women to men exists in the industry. Not considered tough enough, gender exceptions have led to only nine percent of construction workers being women and only a small percent of that number actually working on-site. Through her project, Building Up Girls!, Abby held four workshops for girls ages 5 to 14 to learn woodworking skills.

Evans General Contractors heard about Abby’s project and donated the lumber necessary to make Abby’s efforts of exposing girls to construction a reality. A total of eight park benches were made from this donation and placed around the city in parks such as Newton Park in Johns Creek, GA. The benches ensure not only a great place to relax, but are sustainable and a true reminder that girls can do anything.

The results of Abby’s workshop were insightful. She found 81% of the girls who participated in the workshops felt more confident around tools, 63% had a better understanding of woodworking and 56% said they were more likely to work in the construction or trades field after the workshops.

Abby is now one of the five percent of eligible Girl Scouts to earn her gold award and Evans is proud to support her efforts to diversify the construction/trades workforce.