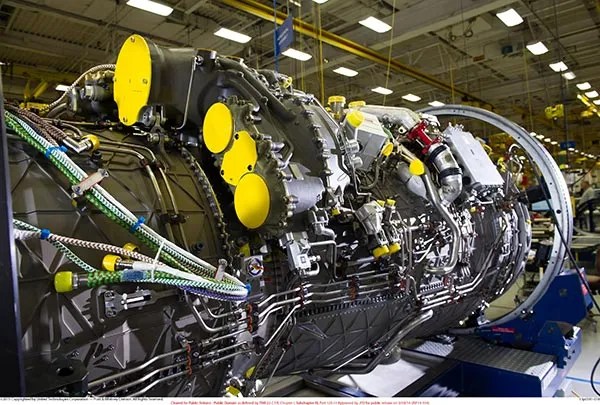 Featured photo of “F135 engine on assembly line” is from the Pratt & Whitney Newsroom.

Pratt & Whitney is adding space at its already large campus on Macon Road in Columbus, but the Connecticut-based company is being cryptic about the intended purpose.

The aerospace industry manufacturer and jet engine overhaul operation declined Monday to say much about a city building permit dated May 20 showing it is spending just over $3.2 million to add 13,200 square feet of space at 8987 Macon Road. Evans General Contractors is doing the work.

“Pratt & Whitney is constantly reviewing its global footprint and takes necessary actions to ensure its footprint is appropriate in response to business requirements and ongoing customer needs,” the company said through an email statement from communications manager Robin Salisbury. “We do not speculate on future business actions.”

That was the response on several questions, including if the Columbus operation was adding new business or growing existing production lines, the timeline for completion of the new construction, and if any new jobs are being created.

The new construction actually is a drop in the bucket for Pratt & Whitney’s Columbus facilities on Macon Road, which encompass 770,000 square feet. It equates to just under 2 percent of the existing footprint.

The company also opened a 105,620-square-foot satellite facility about 18 months ago in Muscogee Technology Park, across Macon Road from the longtime Pratt & Whitney property. The company located a F100 engine overhaul facility there after a decision to exit space in San Antonio, Texas, shifting about 45 jobs to Columbus with expectations to add more. That line of business is U.S. fighter jet engines.

“The business is in full operation,” Salisbury said in her email.

The main Pratt & Whitney complex at 8801 Macon Road, in the Midland area of Columbus, includes its Georgia Forging parts operation, as well as Precision Components International. The latter is fully owned by Pratt, which last July purchased the remaining 51 percent in ownership of the one-time joint venture with Wertheimer Group of Israel.

Pratt & Whitney, a subsidiary of conglomerate United Technologies, opened its Columbus plant in 1983 with an initial investment topping $200 million. In 2011, it invested $19.3 million into an expansion and upgrade of the Columbus plant. Its workforce has fluctuated frequently through the years because of peaks and valleys in the airline and defense sectors.

Pratt & Whitney recorded net sales of $14.5 billion in 2014, essentially flat from 2013, according to financial date released in January by United Technologies, which is traded publicly on the New York Stock Exchange. Pratt’s operating profit for 2014 was $2 billion, up from $1.87 billion the year before.

United Technologies Corp. President and Chief Executive Officer in January said the overall firm’s 2014 profit of $6.2 billion on net sales of $65.1 billion came “despite a slower than expected global economy.”

The company at the time also revised 2015 earnings guidance downward slightly, while also saying it expects to invest $1.7 billion in capital expenditures this year. The $3.2 million being spent now in Columbus would fall in that category.