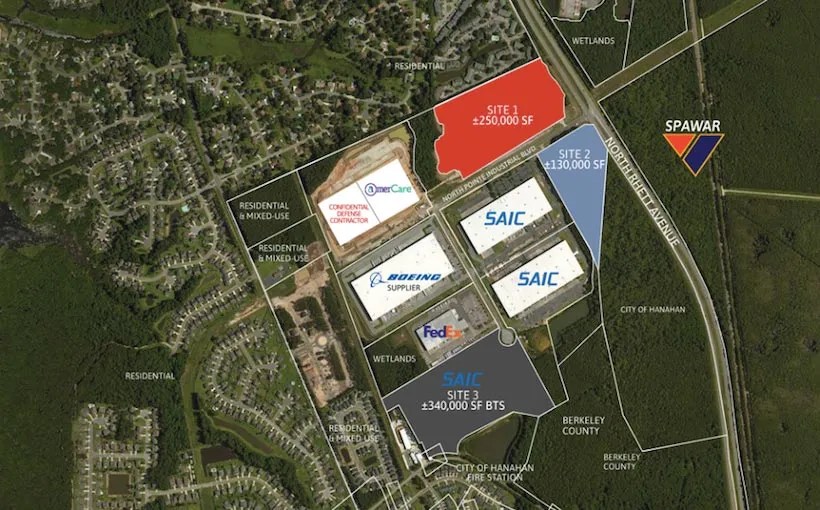 North Signal Capital and Westport Capital Partners have broken ground on a 340,000-square-foot build-to-suit facility for Science Applications International Corp. Bank of America provided financing for the project, which is situated within North Pointe Commerce Park.

West-Signal, a joint venture owned by an affiliate of North Signal Capital and a fund managed by Westport Capital Partners, in coordination with the South Carolina Department of Commerce and Berkeley County Economic Development, have broken ground on a 340,000-square-foot build-to-suit warehouse and production facility for Science Applications International Corp. (SAIC). The building will be part of North Pointe Commerce Park, an industrial area where West-Signal is also developing a 250,000-square-foot speculative multi-tenant Class A warehouse.

The company awarded the design-build construction contract to Evans General Contractors, while construction financing is being provided by Bank of America. SAIC is a technology integrator in the engineering, technical and information technology markets primarily serving the U.S. federal government. The Class A industrial facility is set to include:

SAIC intends to incorporate 20-foot x 20-foot drive doors at both ends of the building. The facility has an expansion capacity of as much as 74,000 square feet. Completion of the project is expected in late 2018.

Late last year, West-Signal acquired the last three developable sites within the contained area along or adjacent to North Pointe Industrial Boulevard in Hanahan, S.C. The joint venture is developing all three sites, collectively referred to as North Pointe Commerce Park, with plans to add approximately 715,000 square feet of Class A industrial space to the Greater Charleston area. In addition to the SAIC warehouse and the speculative multi-tenant Class A warehouse scheduled for delivery in September 2018, another fully entitled 10-acre site, with the capacity for approximately 125,000 square feet, is actively being marketed as a build-to-suit.

“Expanding our platform integration operations is a critical component of our long-term strategy. The site’s proximity to our existing facilities, the Naval installation known as SPAWAR, major interstate highways as well as the Port of Charleston were important components of our site selection process,” said SAIC COO Nazzic Keene, in prepared remarks.

Peter Fennelly, Hagood Morrison, Simons Johnson and Tim Raber of Bridge Commercial will represent the partnership in marketing the remaining two sites within the park.

The Charleston area has been attracting lots of investment in the past few years. Frontier Logistics, a provider of supply chain management services, also plans to expand its existing footprint in Charleston County, following a $35.5 million investment. The company has purchased a 26-acre parcel at the former Navy base in North Charleston, S.C., where it intends to build a 400,000-square-foot facility.